A rare chance for Martin to sing instead of Dave

Q The 80s is on this weekend, as ever. You can locate the show on Freeview channel 716 or online here, and we're on from 6pm on Sunday.

Three hours of 80s goodness, including a song represented by the title of this blog and another represented unmysteriously by the embed below.

We shall have our two Floppy Discs - failed singles from major artists - and an entry from The Nobody's Diary - the acts that never quite made it.

See you on Sunday evening!
Authored by Matthew Rudd
Email ThisBlogThis!Share to TwitterShare to FacebookShare to Pinterest
0 exclamations of response 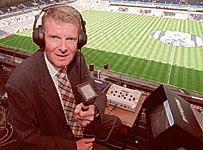 I went off John Motson a bit the other year when he commentated on Hull City's goalless draw at Tottenham Hotspur and proceeded to mispronounce the name of our heroic goalkeeper, Boaz Myhill*, all the way through, but even so the man has deserved the week's worth of celebration of his 40th anniversary with the BBC this week.

He is quite the survivor really, as he sounds very old-fashioned and staid in comparison to many modern commentators but that should be regarded as a strength. You only have to listen to the abysmal Jonathan Pearce chucking in a hideous "where Eagles dare" pun (in relation to the Bolton player Chris Eagles) to realise that Motson has always been about the commentary and not the commentator.

The moment that made him came in 1972, when Ronnie Radford scored a ludicrous goal for non-league Hereford United in a replayed FA Cup tie (which they went on to win) against top-flight Newcastle United. Motson was the junior on a year's trial and this game was not regarded as the great tie of the day so, in deference to people like David Coleman, Barry Davies and Alan Weeks, he got sent there. His commentary, coupled with the now immortal images of the crowd made up entirely of parka-clad schoolkids invading the pitch, became part of folklore. Every football fan over the age of 16 can parrot the commentary and see the images in their mind's eye as if it were happening out of their bedroom window there and then.

Coleman remained the BBC's main man, but Motson got an extended deal from that day and when the famously stroppy main man sued the BBC in 1977, he was removed from football duty and Motson - instead of the more experienced (and, apparently, mightily peeved) Davies, got the FA Cup final. Coleman returned a year later, but from 1979 and for pretty much two decades thereafter, Motson was the BBC's man at Wembley. In the days when both the BBC and ITV covered the big game, it was always the Beeb and Motson for me, and only partially because Brian Moore on the light channel was always unusually hysterical and prone to missing stuff.

The guff about statistics and sheepskin coats are superficial labels pinned firmly to Motson's image; what football thinkers tend to see when his name comes up is a deep understanding of the game, a thirst for accuracy and gravitas and a quiet dip into the background when not required in a gantry somewhere. In more recent times he has become a bit easier to parody, but much of the criticism is because he is the same guy he's always been, now the elder statesman alongside dashing young bucks who are good but largely featureless and, in many cases, all sounding the same.

Some of his commentaries are perfectly ordinary, but there is nothing wrong with that. He hasn't got a "they think it's all over" moment, but at least you know that if it had ever come his words would, like Kenneth Wolstenholme's, been natural and of the moment, not scripted and delivered with a smirk and a clench of the fist by loons like Pearce.

I remember reading a Q&A with Motson a few years ago and he was asked about the commentary he wishes he could take back and do again. Surprisingly, he didn't mention his twice calling Stuart McCall "Steve McCall" when the flame-haired Everton substitute had just scored an 89th minute equaliser in the FA Cup final, but instead went for this (9'35" in)...

Motson says he cringes when he hears his commentary on this goal, the most important England had scored since 1966, because he is too concerned with the antics of the German defenders and doesn't notice Gary Lineker enough until he's actually swiped his shot into the net. I think he's being harsh on himself.

As for my favourite bit of Motson, there's only one choice:

It misses the incredulous "WHAT a goal by Brady!" at the end but it works for me simply because he commentates like a football fan would, sitting at home. And as Motson is a known Tottenham supporter, that also shows his absolute professionalism, especially as Arsenal actually won this game 5-0.

There are things about Motson I struggle with - the daft cackling, the occasional insistence he has on defending overpaid players who misbehave (he said something on the radio about Ashley Cole recently that boiled my blood) - but the man is still great to hear on television and is representative of football's great television age more than anyone else.

He has quit going to tournaments now - indeed, aside from his sojourn to Old Trafford last week, and even that seemed to be only so he could interview Sir Alex Ferguson for the first time in years on his 40th anniversary weekend - he now never seems to leave London. But as long he's behind a microphone somewhere, there's something eternally soothing about watching the game, with all its faults, on telly.