Back of the head with a plastic cup 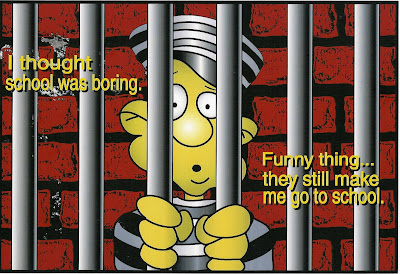 A compelling debate on 5 Live this week about truancy, with education professionals contributing alongside former pupils who skipped school regularly and their exasperated - and criminalised - parents.

It was compelling because the two ex-truants on the programme, both females now in their early 20s, were fantastically eloquent and convincing in their reasons for not bothering, not to mention candid too - they declared, for example, that they were sorry their parents ended up before the courts but it didn't stop them continuing to stay away.

The listener response was predictably mixed - from people saying the one-size-fits-all system has never worked and girls like these needed to be taught according to their skills and capabilities, to the usual array of faux-outraged anger merchants who said the fines imposed weren't big enough owing to the number of malingering parents laden down with vodka, fags and scratchcards.

The nearest I came to truant was feigning a headache in order to get some coursework finished. This hardly makes me disruptive pupil of the century, not least because the feigned headache was believed by my mum so she knew I was home, and I was staying home to do schoolwork anyway - just different (and considerably more vital) work to that which I'd have done if I'd turned up. It could easily act as the most impotent act of teenage rebellion ever.

I had long spells of loathing school but I never thought of bunking off, simply because authority figures around me were frightening. I pass no judgement on today's teachers and parents, but I suspect they haven't half the scare factor - possibly as the law doesn't permit it - as they did "in my day" (I hate that expression, it makes me feel like Arkwright lecturing Granville). My dad was and is the most fantastic man on earth, but when he was cross with either of his sons we knew about it and learned. And there were enough petrifying figures at school to act as a deterrent too.

One lad in my class regularly "twagged" from school. He didn't go as far as to turn up, register and then just walk out again, like the seriously nerveless kid would, but just not come in at all. Upon his eventual return, he would hand over a sick note purporting to be from his mum but evidently written in his own infant school scrawl, and not even remotely looking fussed that the forgery was obvious. I never saw him get into proper trouble though, possibly because he lived in a village far enough away to need a school bus, and so it was a bit of a bind for the school to send someone round his house. I haven't seen him for 22 years but I hear he's still local.

The best thing about this debate on the radio was that the two girls who had avoided education for probably a quarter of their schooling life were now both in enjoyable jobs, working their way up and getting on positively with life. Their argument was that school wasn't of interest to them but their working lives are, and so they put more into those as they are getting more back. It's hard to argue with them as they've lived it for real, but you have to believe they are the lucky ones. I expect there are many ex-truants of all generations regretting to this day that they chose not to go to school.
Authored by Matthew Rudd
Email ThisBlogThis!Share to TwitterShare to FacebookShare to Pinterest
0 exclamations of response

Smoke gets in your purse

Eight years ago yesterday, I stopped smoking. I've blogged about it before so I won't bang on about it again.

What I would say, however, is that while purchasing a newspaper yesterday, I noticed how much it now costs for a packet of 20 fags. Nearly seven quid? Blimey, even rich smokers must be tempted to stop for that much money.
Authored by Matthew Rudd
Email ThisBlogThis!Share to TwitterShare to FacebookShare to Pinterest
0 exclamations of response