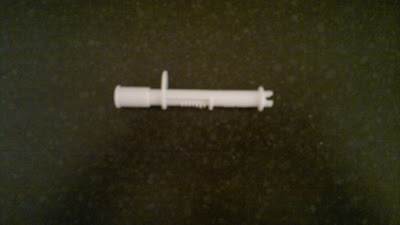 This is my own personal nozzle. Any ideas what it's for?

It was a gift presented to me in the daft hours of Sunday morning by a kindly copper. Yep, after driving what I estimate to be 1.5 million miles in my life, in all weathers, at all hours, in all places, for all kinds of reasons, I was breathalysed for the first time.

It was Saturday night, and the cop had watched me, at 3am, leave the bar where I have my longtime residency. I managed 100 yards before the blue lights flashed behind me. After a cursory discussion about one of my tiny number plate lights being out, he brought out the breathalyser.

I'd been on soft drinks all night, as is the norm for me when working, and so the word ZERO emerged on the screen after I completed my little exhalation. I'd already informed him that a) I was the DJ as opposed to a punter; and b) I had been on diet Coke all night, but he still whipped out the in-car intoximeter. I should add that I didn't just belligerently offer these facts, but did so in response to his questions "where have you been?" and "have you drunk any alcohol?". Despite my latter reply, he still tested me out - and then looked a bit surprised when it traced no alcohol at all, as if he was used to dealing with inebriated liars.

He then reminded me about the number plate light and allowed me to go.

It's December, and every copper is doing it, of course, and quite right too. I'm just surprised it's taken so long for me to blow into the box for the first time. It nearly happened earlier this year in Manchester but the officer accepted my offer of a smell of my breath to save time and let me on my way. And yes, I'd been on the soft drinks all night again.

And, presumably for DNA-related reasons, I am now the proud owner of my own police breathalyser nozzle. I'm half-expecting to have gained quite a collection by the end of the festive season.


Authored by Matthew Rudd
Email ThisBlogThis!Share to TwitterShare to FacebookShare to Pinterest
1 exclamations of response

"Where better to do your best dance than the semi final?" 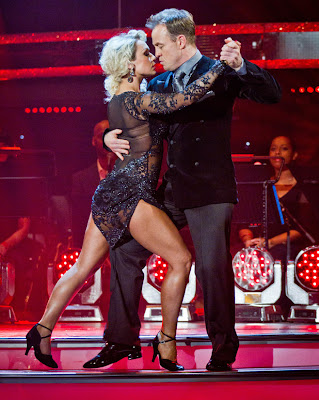 So we're approaching the Strictly Come Dancing final this weekend and even though the largely predicted trio of couples have come through, the show hasn't suffered for it.

Kicking out two couples from five would have been more interesting had there not been two obvious rank outsiders from the quintet of pairings that took to the floor at the weekend, but even so the fact that Jason Donovan found himself in the bottom two last week meant that nothing could be taken for granted. A hellraising display from Alex Jones coupled with Harry Judd turning an ankle slightly and the whole thing was up in the air.

As it turned out, however, the three market leaders barely put a toe wrong. Judd is brilliant but very clinical and I still wonder whether his personality is enough to make him a winner, as he hasn't got that extra bit of obvious chutzpah to hang on to. Donovan, with his intensity in performance and ability to act as a spokesman for them all, and Chelsea Heeley, whose bubbliness has become less irritating as the weeks have passed, both have something extra off the floor to endear them to the crowd.

The two that left at the weekend, Alex Jones and Holly Valance, were telegraphed as likely to depart prior to broadcast, and once Jones got the terribly patronising comments about "deserving" to be in the semi-finals and that she "should be proud" of herself, it was clear the judges didn't see her as a finalist in waiting. The marks proved it. That said, even though she finished fifth out of five, she didn't seem as obvious to exit as Valance, the icy Aussie who was forced to do the dance most deeply unsuited to her laid-back attitude, the Charleston. Wearing sequinned hotpants that were inexplicably pulled up to her navel, she surpassed anything Russell Grant and Audley Harrison had honourably achieved earlier in the series for the title of least suitable dance for any celebrity, and she looked just relieved when it was over, not caring a jot what others thought of it because it couldn't be any worse than how she viewed it herself.

That meant that it was something of an anti-climax when Jones was the first to be declared out of the competition, as an early ejection for Valance might have just prompted audible tension as Jones and Donovan lined up for the final announcement of who was staying and who wasn't. As soon as the two Aussies were pitted together, with Jones out and the other two safely through, the tension evaporated. The public were not going to oust Donovan, with his perfect 40 score for an extraordinarily hot Argentine tango that could have easily represented 90 seconds of pornographic pre-amble, against Valance and her hotpants.

Strictly... has done Jones the world of good. Cast generally as a bit lightweight and slow since joining The One Show, she has shown in the last three months without the restriction of autocue that she has wit, self-awareness and rather brilliantly, she becomes so much more Welsh when being herself, as if the BBC had asked her to tone it down and make her accent more generic when chatting each weeknight. She has become very likeable indeed and maybe she'll be trusted to do better stuff on telly as a consequence of it.

So, the final. My money is on Heeley to win, as her talent is the most natural and her personality the most warming. She has flowered as a celebrity too, being possibly the least well-known of all the amateurs that lined up at the start of the run but now being instantly recognisable by face, smile and those fabulous Eccles vowels, which were mocked ungentlemanly by Sir Bruce Forsyth several times at the weekend.

Heeley also has an advantage over Judd in that her partner, Pasha Kovalev, makes no concessions for her amateur status and throws her in at the deep end. Judd's partner, Aliona Vilani, is a magnificent performer but has incurred the wrath of judges and audience in the past by doing too much scene setting when choreographing a dance and not enough traditional steps. It probably cost Matt Baker the title last year.

Donovan is the outsider, which may suit him given his regular position at the top of the show's earliest leaderboards as other celebrities took longer to settle, but he is the only one with real A-list status and a CV of achievement behind him that will potentially prompt block-voting. Out-and-out popularity with the television audience will decide the final if nobody makes a mess of their dancing, and this is where Donovan's main hope should rest. There is goodwill also for his partner Kristina Rihanoff, whose history on the programme has been via clunking incompetents until this year - John Sergeant, Joe Calzaghe and Goldie all had their limitations, to put it charitably - and so her own long-awaited rise to the top has been noted by the viewers.

Of course, we get show dances in the final too, which ultimately can be the actual difference between first and second. Nobody thought Tom Chambers would win, for example, until he did this...