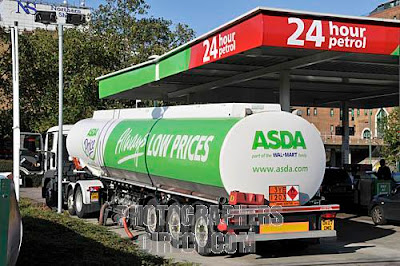 Back to one of my bugbears, but with a rare positive slant. I'm one of many thousands of drivers who, I'm sure, feel quite grateful towards Asda.

A couple of months back, Asda brought down the price of its unleaded petrol to 129.9 pence per litre. This sort of price hasn't been seen, even in the forecourts of the traditionally cheaper supermarkets, for some time. I was dedicated straightaway to finding branches of Asda whenever my car needed one of its many refuellings, with a Hull branch of Asda handily having a 24-hour garage with self-service pumps.

After a short while, the other fuel outlets began to follow suit. Other supermarkets have dropped their fuel down to below 130p a litre, while Shell and Texaco garages - though not all - have also cut their prices. The cheapest Esso and Total filling stations I've encountered have managed to take themselves to 130.9 pence per litre. Only BP - which has an oil leak to pay for - remains high above the Asda benchmark, with the lowest I've seen 132.9 pence per litre. Some are still as high as 138.9 pence. I'm amazed when I see car drivers using their pumps. Then there are the many brands that operate at motorway service stations who currently feel unaffected by Asda's efforts and continue to charge crazy money - I'm pretty certain that if Asda somehow publicised its branches that are based close to motorways, they'd get traffic prepared to briefly turn off and fill up there.

129.9 pence is still far too expensive of course - I always point to episodes of Top Gear that are under three years old that show pumps charging 99.9 pence per litre - but Asda have at least made a start, and have recently upped the ante further by getting down to 128.7 pence. It proves that these fuel companies will charge only what customers are prepared to pay, despite them banging on about Government duty and the rising price of oil. I really hope that Asda, with all the good publicity and goodwill attained by their actions, will dare go for it again soon and whack down their prices further. In the meantime, it's quite nice to be able to fill the car to the brim and not see that day's wages almost entirely vanish in doing so.
Authored by Matthew Rudd
Email ThisBlogThis!Share to TwitterShare to FacebookShare to Pinterest
3 exclamations of response