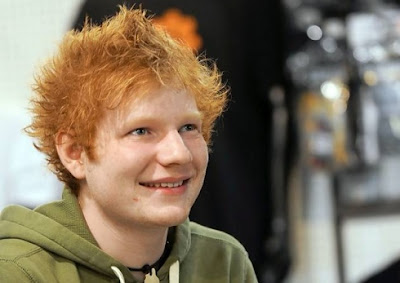 Ed Sheeran is leading the way as far as the BRITS nominations for this year are concerned. By that, I mean that he has taken the headlines so far. I've not read the story carefully as yet, but I assume this is because he is in more award categories than anyone else.

His current single, Lego House, is on radio station A lists, where it follows The A Team, a gentle and controversial song which remains heavily recurrent on the airwaves having been A listed for pretty much its whole duration of release. He has a sweet but powerful voice, he clearly can write a decent hook and he used to live in Hebden Bridge, in West Yorkshire. I only know that last bit because he was a guest on The Pulse of West Yorkshire's breakfast show when I was depping there in the late summer, and I had to replay some clips of the interview during my show.

At the gym recently, I saw the video to Lego House and they've used that second-string actor chap - you can tell I keep up, can't you? - from the Harry Potter franchise in Sheeran's place because they both have extremely ginger hair. And there ends my knowledge of Ed Sheeran.

But I was flummoxed also by another airing of Sheeran only earlier this week on the rolling music channel that is usually on in the gym. It was some countdown or other of 2011's biggest hits, and so eventually, on he came with The A Team.

They didn't show the video - indeed, I don't think I have ever seen the video. If I have, I was too busy doing sit-ups and it passed me by. Instead, they showed the young man himself - what is he, 19 or 20? - singing the song live on some T4-esque programme. And, as such, he was having to censor himself.

This isn't Eric Idle changing one line to "life's a piece of spit". This is Sheeran actually stopping himself from singing for just a split-second to remove a dubious syllable or two and take away the context of the song. There is no swearing in it, of course; the song is about a young woman with a drug addiction who has to go to extreme lengths to maintain her habit. Presumably Sheeran's people had sat down with the programme's producers, pored over the lyric sheet and decided which words or syllables Sheeran would skip over. Words that fell silent included "snowflakes", "class", "grams" and "white".

I can imagine, first and foremost, that this was a very difficult thing for Sheeran to do to his own precious song. I can only assume that he was an unknown promoting the single from the off when he did the performance and therefore was willing to do anything, as a pro, to raise the profile of his work. He maintained something of a smile onstage, but his brain was working overtime as he sang the song and forced himself to think ahead about the next mildly contentious word that needed to be expunged. He can't have enjoyed himself and it didn't come across well.

Also, it did seem pretty pointless anyway, as radio stations had no issue with the song. Drugs are something that need to be discussed maturely with older kids as they are to be kept closed off to younger ones. I suppose it's a target audience thing; primary school kids will watch T4-type shows whereas radio stations have demographics that start at the age of 15, and no younger. This doesn't mean kids younger than 15 aren't tuned in, of course, but the station has no official duty to serve them.

Essentially, this TV programme was censoring Sheeran when the words he was being forced to omit were already in the public domain. As an exercise in protecting the vulnerable, it was about as useful as that era when members of Sinn Fein had their voices dubbed by actors on the news.
Authored by Matthew Rudd
Email ThisBlogThis!Share to TwitterShare to FacebookShare to Pinterest
0 exclamations of response 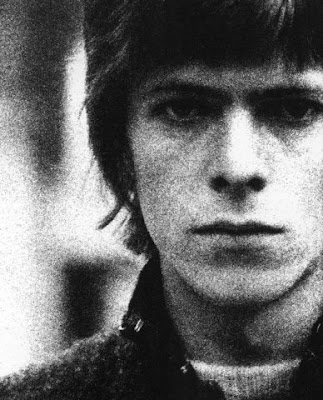 David Bowie's 65th birthday, then. I'm a fan. I didn't really see his influence until I was 18 years old but I'm a fan nonetheless, as best as I can be at least for someone who was an embryo or toddler during his greatest era.

I bow here, however, to my mate Mike. He was a teenager in the early 1970s and grew to adore Bowie from pretty much the moment the chap himself became famous. Mike, when I got to know him in the late 1980s, was the man who taught me about the sentimental value of records and the collectability of certain artists.

Mike was my closest schoolfriend's next door neighbour and his nuttiness for all things Bowie is evident around his entire house. Pictures everywhere give the game away to anyone who makes it into his living room but if you are permitted to delve deeper, you'll find more. This is a man who wishes to own every recording, in every format, via every nation, that there is. We'd go to record fairs - I haven't been to one for years but for a couple of years in the late 80s/early 90s I was obsessed with them - and he'd be looking for the Venezuelan edition of Fashion or Diamond Dogs on limited 10" vinyl while I, with no artist to obsessively collect, bought singles that I knew our local hospital radio station didn't have in its library. More often than not, he'd always find that elusive thing he was seeking too.

When you saw his collection it was eye-watering. Every album would have two copies; one for playing, one for carefully storing away, wrapped in sellophane, to be untouched for the duration of his life. Each of these albums would be in vinyl and cassette; each would have separate issues depending on special editions available and the countries they were available in. Around this period, he was also in the process of adding everything on CD too. Then there would be every single, again in every format, again from every country he could find a copy from. His collection was incomplete by his standards - I expect it always would be - but he never stopped trying.

He had reels and reels of Revox, featuring Bowie sessions from Radio 1 in the 1960s and 1970s, as well as interviews and live concerts. Every book ever printed, every magazine article he could find, every bit of fan club memorabilia, every concert ticket. Concert tickets for gigs he was physically and financially incapable of attending but had purchased through sources afterwards. And all of this, by the way, before the internet. I haven't been to his house for many years but I almost dread to think what Bowie-related stuff he now owns courtesy of eBay and newsgroups.

But his prized possession wasn't something Bowie had made or recorded, it was something he had held.

Mike went to many a Bowie gig in the UK, obviously. At one such gig, the great man lit a cigarette onstage and, realising it was the last one, chucked the empty Marlboro packet into the crowd. Mike caught it. It remains to this day - probably 25 years now, maybe more - in his display cabinet, symmetrically between the wine and brandy glasses. Its presence means every visitor will ask about it and he gets the pride of being able to tell.

Everything is insured for thousands, and Mike claims it will all be buried with him, though I expect he is joking on that last point. I wouldn't actually disbelieve him 100 per cent though. I really wouldn't.

He has a wife, three grown up kids and now a grand-daughter too. His obsession has, for all its time consumption, never been to the detriment of his family life and his wife, also a Bowie fan of the era, has just taken it as part of the package. He does like other music too; at the time I knew him I was beginning to discover T Rex, as mentioned here, and he showed me his not unsubstantial T Rex album collection, while adding that somewhere in his loft or cellar was a grainy recording of Bowie's appearance on Marc Bolan's final TV show prior to his road accident.

Ask him about other artists in his collection and he'll relate them to Bowie. Got any Queen? Yep, Under Pressure. How about Mott The Hoople? All versions of All The Young Dudes. The Rolling Stones? Only Mick Jagger and some other geezer doing Dancing In The Street. Pet Shop Boys? There's Hallo Spaceboy, right there. Bing Crosby? Oh now, come on, you know that slightly awkward Christmas recording is going to be in a cupboard at Mike's place somewhere. Samantha Mumba? Well, she wouldn't normally fall under his radar, but one of her biggest hits did sample Ashes To Ashes quite heavily. And, naturally, all of the above are in all formats, from all countries, etc etc.

I still see Mike occasionally as, until a recent bout of ill health, he was a taxi driver in Hull. As pleasant and as cheerful a man as I've ever met, and he remains living proof that if a single rock star is worth it in your eyes, no ridicule or raised eyebrows from anyone is going to halt that. My first memory of Bowie is Let's Dance, an album Mike - like all "proper" Bowie fans - sees as a clinical and technically impressive work rather than anything truly reflecting what Bowie was about. Though of his 1980s output, he does like the Tonight album, and from it, Blue Jean. And so do I.