And don't forget to pay anything you owe 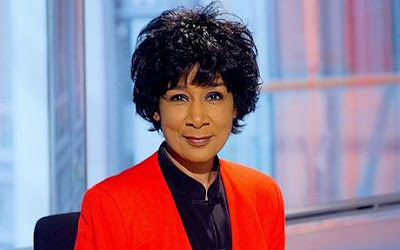 It's Moira Stuart's most lucrative time of year - indeed, from September to January you'll hear her on almost every breakfast show in the country.

I once suggested to an old boss that there should be an OFCOM issue with her voicing the HMRC adverts on commercial radio while also reading Chris Evans' news - there is potential for listeners to say "hold on, isn't it Moira Stuart also on Radio 2 at this time?" and immediately re-tune. Of course, on Radio 2 her work (reading news bulletins that someone else has written and giggling with difficulty at Evans' stuff) is done by 9am and so she then just dominates the commercial oeuvre instead.

Those adverts reminding the self-employed to sort out their tax returns by the January 31st deadlines are ubiquitous. I can't imagine they are inexpensive, either. They appear at the top of adbreaks and as newslinks too, so they've really spent a lot of, er, taxpayers' money making them and scheduling them. This year, they are also straight down the line - sort it out, pay up on time, or else. The last couple of years have had Moira suggesting that if we get it all done early enough we have time to "play footy in the park" (which didn't sound right coming from her at all) or "have lunch with an old flame" - in her case, Des Lynam, I expect. But HMRC, desperate to appear tough while allowing Vodafone to rip off every adult and child in the country, have ditched the friendly auntie Moira and gone for her authoritative patter instead.

That said, they are doing the right thing. I bumped into my accountant while walking the dogs one day last week and he told me that he is still having clients, new and old, turn up on his doorstep with huge piles of folders and papers asking him to sort it out. Now I took mine round in September, and got notice through a month or so later of how much I owed, and that's allowed me to save up. I can't understand anyone who leaves it so long, risking fines and all sorts of other trouble. So maybe Moira's standpoint is right, as there are many people out there who, like at school when confronted with homework on the last day of the holidays, pretend it isn't there until they can pretend no more. So while Moira's ads may sound like a mild lecture and a spot of condescending finger-pointing, they clearly need to be.

I hope she got her tax return in on time and paid up. Imagine the headlines.
Authored by Matthew Rudd
Email ThisBlogThis!Share to TwitterShare to FacebookShare to Pinterest
3 exclamations of response