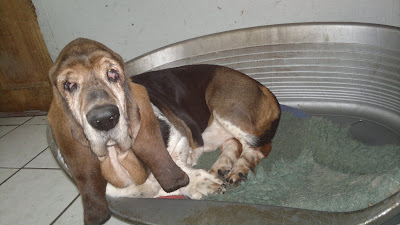 Little to tell you or shout about this week, so instead enjoy a photograph of my Basset hound Bentley, basking with glee to the point of euphoria on the occasion of his tenth birthday.
Authored by Matthew Rudd
Email ThisBlogThis!Share to TwitterShare to FacebookShare to Pinterest
0 exclamations of response

"There's the four thousand I owe you, plus a thousand compensation..." 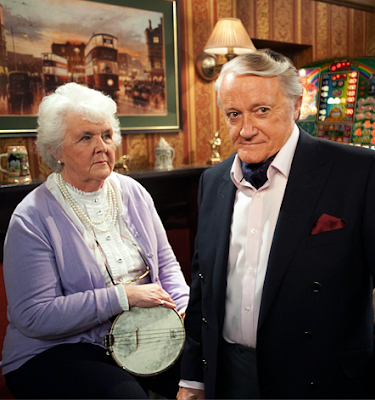 Corrie time again, then. Despite its success at the NTV Awards, it hasn't been the most amazing of eras lately, but it's picking up again. Observations I would have right now include...

1: The "Sylvia falls for over-tanned American" storyline was absolute garbage, and I'm glad it's over.

2: Becky will be missed for a very, very long time. In terms of providing the character of the troubled, feisty, demonised young woman that Coronation Street always needs, there isn't another candidate on the cobbles at all.

3: Brian is very funny, but Julie gets right on my nerves.

4: The actress who plays Lesley the Alzheimers sufferer is playing a blinder.

5: Nobody cares that Rosie Webster has gone, and the storyline leading to her exit was suitably useless and vacuous.

6: With the show about to move to the MediaCity complex in Salford, it's no wonder that suddenly characters are making references to their Salford "heritage" in scripts.

7: Since when has Gail been seen drinking too much? It was always a "port and lemon for Phyllis and an orange juice for me" in her days of having a quick one after a day's work at the cafe. There's rarely a bottle of wine open at home, she's never drunk spirits and I can't recall any past storyline which has shown her roaring drunk. Suddenly though, she's a borderline alcoholic who is stealing her mum's gin during the day...

8: Nigel Havers is ace squared. Hope he's back for a good while. Though it's a surprise that he hasn't (yet) been told that Audrey has since seen off a wine-loving transvestite since he did one to the Caribbean.

9: Tina can't be only just 21, surely? It feels like she's been in the show forever, and in a good way. Time for her and Tommy to do the business. They would threaten to be the best looking couple in Corrie history if so.

10: I'm sure it's in the pipeline, but at any point is there going to be an acknowledgement that Betty isn't coming back?
Authored by Matthew Rudd
Email ThisBlogThis!Share to TwitterShare to FacebookShare to Pinterest
3 exclamations of response