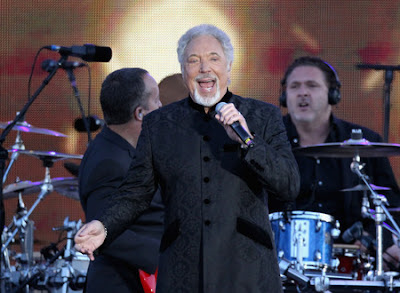 After the jubilee concert, the critics and wider public were banging on about Stevie Wonder's class, Paul McCartney's ability to woo a crowd just by dint of his existence, Grace Jones' physique, Cheryl Cole's nerve and Gary Barlow's crashing dullness.

The comedians were panned (rightly, though I thought Lee Mack was okay) and Rolf Harris was the ultimate pro, treated a bit callously. The opera singers were impressive and immediately reverted to obscurity afterwards, while Elton John's voice disintegrated with every syllable. He really should stop performing, or write a few more versions of Song For Guy.

Why is this? The guy is not treated as the icon that he is. He could outsing Elvis in his day, by the King's own (apparent) admission. His vocal cords have never subsided through age, he has lived a clean (if not always moral) existence, he always acts the good sport, he seems fundamentally decent and, without fail, he is always a good turn.

But beyond anything else, he never misses a note. He did two songs on that stage - Mama Told Me Not To Come and Delilah, and didn't even come close to a bum moment. And yet he barely registered.

Maybe the fact that he was pitch perfect was the reason. He has had his share of reasonable publicity of late thanks to providing the one true bucketful of credibility on The Voice, and so rather than pile it on, the press decided that ignoring him was the best way. A great singer, singing greatly, doesn't garner good copy.

More than anything though, I think it is because Tom is "just" a singer. I don't think he gets credit because he isn't a musician or composer - he sings. He learns the melody and the words and then sings. Other people do the "work" and he takes the plaudits.

Okay, so in the 1970s and 1980s he preferred to swan around Las Vegas rather than graft in a studio and on a tour bus, but since his full-tilt return around the mid-90s, it seems every youthful pop star has wanted to embrace him and learn from him. His records have been strong, if not necessarily earth-shattering, and he hasn't tried to project himself as someone trying to stay young around these bucks and flighty female singers who worked with him. He stopped dyeing his hair and allowed himself to be the father figure.

Ultimately, like with a lot of pop singers, you can have all the charisma and composition talent and generosity and newsworthiness as you like, but there is still only one thing that will maintain your fame and fortune in the long term, and that's your voice. Tom Jones has his, at 72 years of age. We should treasure him a bit more.

Have some vintage, floorfilling Tom from the 1960s...