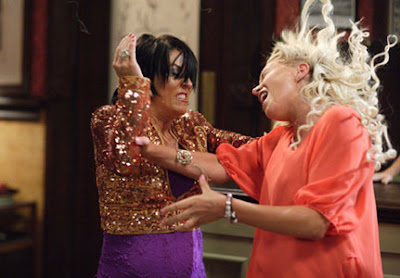 I witnessed a full-on, no-holds barred catfight at the weekend. It was vicious, caused injury to one party and ended up with a hell of a mess on the floor. And it took place in my kitchen.

So we're not talking the vernacular here (though I've seen plenty of them too - I broke one up between two female snooker referees at the Waterfront nightclub in Hull in 1998), but an actual, literal, catfight.

It was a shock. The four cats in the house tend to get on famously, though one of the cream shorthair boys sometimes chases Sox, the lone female, around the kitchen without causing harm. Yet the scrap that Sidney, my youngest, started yesterday was something I never thought would happen.

He wandered in from a few minutes enjoying the garden in the sunshine and went potty. I wondered if he'd chewed on a plant that does to cats what aniseed does to dogs? Whatever it was, this daffy, peace-loving, perennially sleepy cat suddenly darted into the house, tail as wide as a telly, and began chasing blameless, random fuskers around. Out came the claws and teeth and the fur of four cats went everywhere. Only when they took the fight underneath the dining table and I was able to bang my fist on the table very loudly did it frighten them into ceasing. Sidney's tail remained in its angry state for some time afterwards, and poor Sox needed some warm cotton wool on a nose scratch.

Half an hour later, all was tranquil again (once the vacuum cleaner had done its job, that is) and Sidney was fast asleep in his bowl while Harvey and Oliver stretched out on a windowsill and Sox slept on her favourite cushion. Sidney, when he chose to wake up, knew he was in bother and spent the rest of the evening cosying up to all. And, of course, he succeeded.
Authored by Matthew Rudd
Email ThisBlogThis!Share to TwitterShare to FacebookShare to Pinterest
0 exclamations of response