Okay, I watched Dallas. I did so reluctantly, because people were tweeting about it, because there wasn't much else on, because I was curious. Etc.

It was absolutely brilliant.

I've no real interest in the return of Dallas to our screens, though I was fascinated to see Larry Hagman in such good health considering his age and endless list of ailments and appearances in operating theatres. It's good that he is still willing to bum about talking to any presenter or hack with an interest in the revival of a show that, at its peak, was brilliant and ludicrous in equal measure.

Compared to some American dramas, as well as soaps generally from the world, I always thought Dallas was especially well acted, the pouting ham-ups from Linda Gray notwithstanding. Hagman was always tremendous and for as long as his health allowed, and as long as JR Ewing was within his motivation, the show had to keep going. As batshit crazy as the plots and storylines sometimes became, somehow JR was always reassuringly believable and bad.

I can still feel the thump of my heart reaching breakneck speed when, after months of teasing, we saw for the first time the return of Bobby Ewing in the shower. We all knew how mad it was to re-cast Patrick Duffy and pretend his death in the previous series was all dreamt by Pam, though then and now I still thought it woeful that Pam had the briefest of cries in front of her naked ex-and-soon-to-be-again-current-or-was-his-proposal-part-of-the-dream-too husband about how she'd imagined him being mown down in a car, and then everything returned to normal. Or as normal as it could be in Dallas. Years before, I remember my teenage babysitter shrieking "Oh my God, he's killed Pamela!" (he hadn't) when a Saturday night episode concluded with Victoria Principal lifeless in the Southfork pool, while I confusedly carried on shoving my Matchbox cars along the carpet.

The guff about Who Shot JR? passed me by as a piece of drama though I remember the madness that engulfed newspapers and TV bulletins and that famous shot of "the tapes" arriving in the UK that featured the episode which would tell all. We all knew by then, of course, as our charming press found out and chose to reveal it. During the same period, I remember the death of Jim "Jock Ewing" Davis being announced most sombrely by John Craven one teatime.

Beyond the characters and plots, I loved the way the show loved itself. The opening and closing titles combined rolled in at almost three minutes. There was clearly some serious posturing going on when it came to actors' and crew members' statuses, as proved by the appearance of Dack Rambo - acting's most mental name - in the prestigious three-way opening titles after just one series as Jack Ewing. And yet the character didn't last a great deal longer than that second season. After the three-ways had finished and the first scene began, we'd get some senior production crediting and then the crucial but short-term characters in name only ("also starring Deborah Shelton as Mandy Winger" ... and John Beck as Mark Graison") prior to the first words being spoken.

At the other end of the extreme, the actors who played regular but decidedly peripheral parts were relegated to the end credits, often after various production members and the theme music writer had been given their due. After JR, Sue Ellen, Ray, Bobby and Pam, there can't have been many more characters who appeared in the show more often than Teresa the Southfork maid (standard line: "Telephone call for you Mr Farlow") or JR's efficient fox of a secretary, Sly, and yet they were right at the foot of the rollcall. After the production bods, you'd get the "Guest Starring" list (people you'd never heard of unless it was Ian McShane), the "co-starring" list (jobbers on a one-off, playing bartenders and waiters at the Oil Barons Ball) and finally, the "featuring" list (those Teresa and Sly characters that glued scenes together week on week; also the point where the children that played John Ross and Christopher Ewing would appear). And then the remaining credits just went on for aeons, all soundtracked by that fantastic title music.

I did go off Dallas for a bit and missed the series when JR met Cally and married her, then ended up in an asylum. But I was back with it in time for that doolalley final series and the episode where the devil on JR's shoulder re-introduced him to everyone who he has conned over the years, prior to the final scene where he shoots himself (out of sight) and Bobby brings down the curtain with a final "Oh my God" as he opens the bathroom door to find his brother's "corpse" there. Though knowing Hagman's habit of trying to test the straight faces of his fellow actors during heavy scenes, Duffy probably filmed that final take while looking at Hagman showing his bare arse. 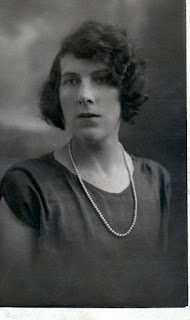 On September 1st, 1895, Edith Eleanor Sutton was born in Hull. She would be the tenth of 11 children born to her parents, and so would begin the life of the only centurion I've ever known in my family.

September 1st of this year has just happened, and on that date I always think of her. Nellie, as she became known to all, lived quite a life and managed to do so without ever moving away from her home city.

She worked as a nurse and eventually became a matron prior to her retirement at 60. This was a suitable vocation for a lady who was always very quick to see the good in people. She needed to be, as the stick she took when she was around 30 years old shaped her for life thanks to her nerve at having a child out of wedlock.

Single mums to this day take loads of unwarranted stick. Can you imagine what it was like for Nellie when, in the late 1920s, she got pregnant by a man who was not only not her husband but, as it turned out, the husband of someone else? As far as we know, he never told her the truth until it was too late.

Families, martyrs to their religious beliefs and the puritanical attitudes that came with their Victorian upbringing, were all too often quick to usher away any girl who got herself into trouble like this. But not, I'm proud to say, my family. Nellie gave birth to a little girl, named her Brenda, and brought her up with the aid of her extended brood.

I wrote here two and a half years ago about my great-grandma of Italian ancestry who was a genuine pariah in the family, imposed entirely by herself, after she gave birth to two kids just before World War I and then left them with her husband to go off with another man, rarely staying in touch afterwards and dying in her 90s still an unknown, unloved and largely unforgiven figure.

Well, when she abandoned her kids - my grandma among them - it was Nellie, and her younger sister Doris, who prevented them going to the workhouse. The kids' father was their elder brother and he was able to continue working and providing because Nellie, though especially Doris (who never worked due to ill health, and so stayed at home), became their figurative mums, initially with their own ageing mother.

So when Nellie had her own bit of brainstorming news, and Brenda came along, the family rallied round. They were used to doing that anyway, but in this instance the family member who needed the support had damned well earned it. Brenda ended up becoming a favourite cousin to my (then teenaged) grandma and great uncle and when Nellie retired, Brenda was divorced and single again and so the two of them, plus Doris, clubbed together to buy a fine, multi-roomed terraced house on a major thoroughfare in east Hull.

The reason I'm telling you all this is because of two events occurring this month. Firstly, that house in east Hull has just been sold as Brenda, now in her mid 80s, has decided to move into more suitable accommodation with her gentleman friend and so a house that has meant so much to the family for half a century has now gone.

Secondly, my mum turns 70 at the end of the month and a family Sunday dinner to celebrate has been planned. The senior figure in attendance will be Brenda, that illegitimate child of the late 1920s that was born and raised into a family that never cared what others would say about it.

Nellie spent 40 years in retirement, most of which was spent gossiping and reminiscing from her big armchair in the TV room of that terraced house, with Doris jumping in every so often to offer a catty and brilliant comment of her own. The two never married and even shared a bed together for life, something that only ended with the death of Doris in 1986, a year after Nellie's 90th birthday. At the party for that event, Nellie made a speech that thanked her daughter, grandchildren and great-grandchildren prior to Doris bringing the house down with the interruption "What about your bloody sister?"

We'd visit regularly when I was a kid. Nellie and Doris would never tire of singing songs from their childhood and recall events in intricate detail; their collective memory was as clear as geriatric storytellers as it was as children. Brenda worried that Nellie wouldn't recover when her little sister died, but she carried on stoically for nine more years. She was bedridden but still wisecracking by the time she turned 100, and died three months after reaching the milestone.

She's the only centurion my family have ever known, and she was a genuine phenomenon. I suppose there were more single mums in the 1920s than we might assume, but my guess is that the majority weren't as bloody-minded or determined as her, nor did they have the great good luck to have a family who put the feelings of those they knew ahead of those they didn't.
Authored by Matthew Rudd
Email ThisBlogThis!Share to TwitterShare to FacebookShare to Pinterest
0 exclamations of response

In the month of August 2012, I presented 41 radio programmes, hosted four club nights and drove somewhere in the region of 5,300 miles.

Hopefully this explains entirely why this blog has been untouched for so long.