"That was more than magical - it was a miracle!"

And three weeks in, time to talk about Strictly. Given that I'm usually prone to babbling on about the show once a week, it perhaps shows just how uncontroversial this current run is, without ever being uneventful. 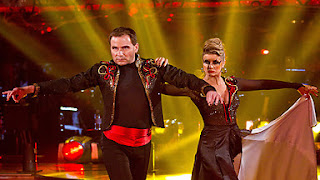 Things have altered for me though in the opening spell, mind, such as my opinion of Richard Arnold. Didn't like him at first, as the regular crowbarred-in-from-ITV contestant who will guarantee discussion of the show on the main rival channel. But he is someone I've warmed to. He isn't especially charismatic, but my goodness does that man have wit. He genuinely makes me laugh. He isn't a good enough dancer, especially when forced to turn on the machismo, but his self-deprecation and side-ordered one-liners will earn him votes for a little longer. He's learned how to take the show seriously without taking himself seriously, and that's tough.

Beyond that, the rest of the bunch have pretty much evened themselves out and now it's a proper contest. The three who have gone have not been surprising, especially with the welcome if rather boring return of the dance-off, and as a result Johnny Ball and Jerry Hall got their deserved cards, one by dint of being not very good, the other by dint of being not very dedicated. Sid Owen's exit yesterday was simply about not being good enough, irrespective of his attitude or experience of stage performance. He didn't seem to be having much fun either.

Michael Vaughan's quickstep represented probably the most extraordinary transformation we've ever seen in the space of seven Strictly days. In the dance-off last week and surviving by a whisker, he skipped about the floor in his penguin suit at the weekend as if he'd been doing it for years. Like Robbie Savage last year, he seems to be developing as a ballroom man, and his continuing presence is dependant on his performing properly in the ballroom disciplines while doing enough in the less predictable latin.

Vaughan's one glorious display doesn't yet make him a dark horse; I'd love him to win, as he's a great sportsman and a smashing bloke, but he's the definite outsider still, and goodwill for the man as a cricketer and leader of the finest England team in a generation will keep him afloat for a bit, but not forever. The other blokes vary from the unexciting but competent, such as Colin Salmon; and the over-eager buck who'll survive through his fanbase, like Nicky Byrne. Louis Smith, meanwhile, is the Ricky Whittle du jour - he'll sail through to the last stages but lose out because ultimately he isn't very interesting.

Calling the female competitors is much harder as, now that the awful Hall has gone, they're all pretty good. Victoria Pendleton can still resemble a chick whose stilettoes have snapped when she misses a step, but get her through a whole dance and she does well. Fern Britton will get better by the week and has national goodwill that a minority sports star, even one with Olympic gold medals, can't manage. Lisa Riley is very entertaining and not unaccomplished either, while Dani Harmer and Kimberley Walsh have that youthful confidence and focus that will take them far, though Harmer for me is treating the competition with more respect.

That leaves Denise Van Outen, who has had to cope with criticism for being too good too soon, which is a tad unfair, and it's almost as if she's deliberately toned it down in order to level off the flak, when a competition is just that. She's still the obvious winner at this stage.

As for the show, the dance-off's return - good for dancers, bad for entertainers - will at least make sure that the brief that the connoisseurs demand the show sticks to will be retained, and so far nobody has controversially gone through at the expense of someone better in the dance-off. On the judging panel, it annoys me that Bruno Tonioli feels the need to stand up and gyrate with every single comment he makes, though it actually annoys me more that Len Goodman hams up an irked reaction his way next to him every single time. I'd like to think that Darcey Bussell demanded to be sat away from Tonioli when she agreed to become the new judge. She's following Craig Revel Horwood's lead by being honest and practical in her criticisms - though not brutally so, of course - and her stay is working wonders.

They've tried to take it on a step this year with extra props in the dances and extra-curricular duties for others - Revel Horwood as the Tin Man, Anton du Beke as Frankenstein - and the 'abracadabra' gag from Vaughan after his quickstep made me laugh a lot. It at least shows that the production team is afraid of going stale. No such thoughts from Bruce Forsyth though, who seems to be playing along with the idea that he is going stale. More and more fluffed lines keep a-coming, but to combat that he seems to be improvising more than ever, and when he does an aside to the crowd or the judges he gets it largely spot on. Ultimately, however, I still think the only reason he is doing the job is because nobody at the BBC has the guts to tell him it's over.