It's just the same old show on my radio 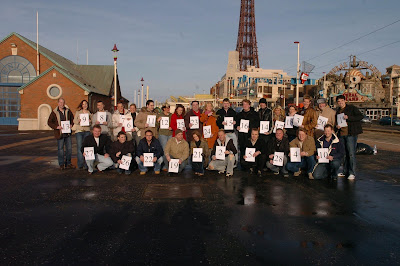 I'm grateful to my old acquaintance Roy Lynch for sending me this photograph. He and I are on it, along with (almost) every other presenter hosting a breakfast show on commercial radio in the north west of England at the start of 2005.

All rivalries were put aside (not that jocks ever have them; only off-air staff are bothered with what the opposition is up to) so that we could assemble under the region's most prominent landmark, Blackpool Tower, to have our photograph taken.

The tsunami hit on Boxing Day 2004, and early in 2005 a couple of high-flying bods in commercial radio down south decided it would be a good, worthy and fantastically complicated idea to have a day when the commercial sector came together, broadcast a networked output and put a fundraising message across.

The programme directors of all the major corporate radio groups of the time agreed, but logistically it was going to take some doing. The set date was Monday January 17th and it would start at 6am with a day of networked shows but there would be three slots per hour where the local jock would opt in and do some stuff about events happening round their way. Like when Jonathan Ross gives way for Peter Levy or Gordon Burns on Comic Relief night.

All adverts were dropped and news bulletins came from IRN with a one minute local opt in for, again, each individual station to do a quick update from its patch. So most of the time I and my fellow local presenters spent our show time listening to the national output, which came from Capital Radio's premises.

It did throw up some incongruous combinations. I was working for Imagine FM, a female-friendly station which targeted listeners in their late 20s and early 30s. But at the same time those targeting much more youthful audiences, such as Kiss FM, were broadcasting the same stuff. So at one stage, Kiss FM listeners were tuning in to hear Simon Bates, Jade Goody and Tony Blackburn on their station.

Another feature was for one locality per hour to get some national airtime, introduced by the network jock. So the whole country would suddenly hear Ben Fry of Yorkshire Coast Radio in Scarborough talking about what his patch has been doing to raise funds and awareness, then a nervous jock at Red Dragon FM in Swansea would do likewise an hour later. In the very crowded Mancunian patch I worked in, I wasn't asked and neither were any of the post-breakfast jocks on Imagine FM. Mike Toolan of Key 103 in Manchester did a bit on the nationalised output though, and despite our obvious day-to-day rivalry with this station, we held our nerve and kept him faded up.

Such sportsmanship wasn't on show everywhere though. I can't remember the details, but the group I worked for (known as the Wireless Group, now UTV) had a Scottish station which was fortunate enough to get a national slot in one of those hours. Someone monitoring rival reaction then reported that a station up the road faded out their rival jock when he came on, and put a record on instead. Bad form.

It was all a bit frantic and hurried, but it worked. Chris Evans effortlessly presented his first radio programme for years on the network and all agreed afterwards that his absence had been such a shame. Simon Bates teaming up with Jade Goody was an addictive bit of car crash broadcasting, especially as Jade seemed to be a poor reader and yet was given the task of telling the audience of all the various events and fundraisers going on around the country.

TV cameras were there and a short fly-on-the-wall thing was broadcast on ITV later in the evening. As for the BBC, well as far as I know they chose not to mention it at all, certainly not on a national level. I suppose that's fair practice, given that the commercial sector largely avoids Children In Need and Comic Relief as they are BBC innovations and the local radio sector are as involved as BBC TV and national networks.

On the photo, you might not recognise too many people as they are, clearly, famous voices rather than faces, and even then only in their working localities. Tony Wrighton is on there though, who is now on the Sky Sports News anchoring roster. He was doing drivetime on Century FM at the time, the only radio station which covers the north west in its entirety and therefore the only station with a staff member genuinely posing alongside all of its rivals. I assume he was there as Darren Proctor, Century's breakfast show host of the time, was on holiday. Tony is #3. I don't know who most of them are, I must say, but there is Kev Seed (#27) of Radio City in Liverpool; Fairclough and Vix (#23 and #24) of Tower FM in Bolton; and Key 103's Rob Ellis (#1 - again sent as breakfast replacement by his station). My old mucker Ian Roberts, of Magic 1152 in Manchester, is at #20.

My pal Roy, who sent the pic to me, is #10 and was the local jock there - he was doing breakfast on Radio Wave in Blackpool - and I'm next to him at #4, and I remember feeling particularly bleary-eyed that day. Most of us did - we'd all hot-footed it from our studios to Blackpool for a lunchtime photo session and we were knackered, reacting to the winter sunshine and the parky temperatures. I had to drive back to Hull afterwards, too. That's quite a smart jacket I've got on - I haven't worn it for ages...

The photo appeared in (apparently) most of the local newspapers in the north west of England as part of the publicity for UK Radio Aid. The official website is still going - and here it is.
Authored by Matthew Rudd
Email ThisBlogThis!Share to TwitterShare to FacebookShare to Pinterest