When Savage Garden brought down our emails 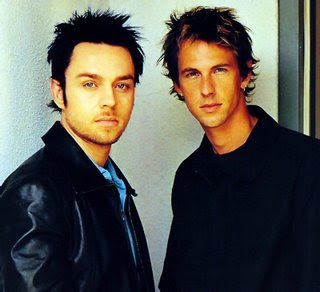 I heard a Savage Garden song on the radio this morning. They were unusually popular in the 1990s and their new releases regularly made radio station playlists and yet not too many people - within the industry, at least - ever seemed to rate them.

Firs time I heard their debut single, I Want You, was when I played it on the weekend graveyard shift at Hallam FM in 1997 and instantly I assumed it was the bloke from Roxette with a new band. And sounding like Per Gessle shouldn't exactly be a great career breaker.

But anyway, they succeeded and developed a fan base. I'm not sure who their target audience really was. A clean-cut Aussie duo, they weren't a teen idol band for screamers, despite youth and looks, but more of a lite-pop outfit that young mums and equivalent social demographics could warm to. Blokes didn't seem to like them very much. When Truly Madly Deeply, their big ballad, was released, women went eternally gooey for it. It still gets requested now. Then there was Affirmation, the philosophy of life anthem that was mercilessly parodied by breakfast show presenters but, again, was seen as some great lyrical masterpiece by the fans. And as that fanbase really grew, radio began to know about it.

Savage Garden fans in the UK were potty - or, at least, the ringleaders around one of the first online forums about the band were so. In the late 1990s, radio wasn't playing "enough" Savage Garden for their liking. I remember at Viking FM we only had two of their songs on recurrent play (three times a day maximum - Truly Madly Deeply and the Almighty remix of To The Moon And Back) and the rest simply didn't "test" well, as the famed expression of the industry goes. Brand new singles would go on, but maybe not for very long. Some of the sloppier stuff - I Knew I Loved You, for example - got on to the late night love shows but that was pretty much it. Generally, this was replicated by most commercial stations as ultimately you had to play the stuff your core audience seemed to like the most.

And these fans didn't like it. So, one day, somebody on these forums spent a whole day researching the name of every radio station in the UK and then, from within, making a list of all the presenters on that site. This long list was then sent out to other fanatics, who all typed their own "Play Savage Garden!" begging letter with equally restricted levels of sophistication and literacy and, with the press of one button, sent it to every radio presenter in the country.

They didn't try to hide the fact that it was a bulk email, which took out any personalisation and proof of actual listenership which might, if anything, have been the one thing to sway a jock into doing as they asked. DJs didn't then - and don't now - choose the records they play but always made suggestions and contributions to the programmers who did compile the playlists.

I got my email and was staggered to see hundreds and hundreds of addresses thereon. It had gone to everyone from Chris Moyles and Ken Bruce to invisible overnight jocks like me. They had also, interestingly, sent it to presenters whose role perhaps involved playing less music, no music or just different music - presenters on Radio 4, for example. And Classic FM. This email campaign was all about awareness and obsession, and little to do with impact.

Moyles took the piss completely on the afternoon show he was hosting at the time, reading verbatim from the forums that had instigated this campaign about how much they knew and loved and admired Darren Hayes. My abiding memory of it was getting a reply through from a presenter at a station in Leeds who, accidentally or not, had clicked Reply To All instead of just Reply, and so hundreds of radio presenters, as well as the Savage Garden crazies, got his one word response: No.

This caused further problems, as we started to get daytime email from irate BBC local radio presenters saying that this email had bust the system and they were now unable to get online. A few internal mails were then sent out, asking us to ignore and delete any bulk correspondence from these fans as it was making trouble for other presenters elsewhere. It wasn't a rivalry thing - the email from Leeds put out a BBC intranet system in Cambridgeshire, I think it was. Pot luck. Or pot lack of luck, if you prefer.

The campaign continued for a while longer and the effect remained entirely nil. Savage Garden performed Affirmation at the opening ceremony of the Sydney Olympics - introduced by Barry Davies, who clearly had to consult a grand-daughter or great-niece to get his stats on them - and then split up. Darren Hayes' brief solo career was essentially Savage Garden under a new name (though he had a hit with a song called Strange Relationship that I really liked).

When the September 11th attacks happened, I was at Imagine FM in Stockport, having already been on air with breakfast, and my colleague noticed just in time that his first song after the extended, mournful, serious news bulletin was a Savage Garden song called Crash And Burn. His mouse-clicking fingers were quick enough to save the day.

You've noticed I've not included an embed of any of these songs. Yes, that's deliberate. I wouldn't want the online fan club to think I'm on their side.
Authored by Matthew Rudd
Email ThisBlogThis!Share to TwitterShare to FacebookShare to Pinterest

I love these little mad groups of people

'Affirmation' is one of those annoying songs that, musically, never bloody goes anywhere. The composer just keeps repeating the same verse with different lyrics, but forgets to put in any kind of chorus.

Other songs of this type include - 'Wake Me Up When September Ends' by Green Day, 'In The Army Now' by Status Quo, and Andrew Lloyd-Webber's 'Unexpected Song' from Tell Me On A Sunday.

And they rank among the most boring, pointless and downright irritating songs of all time. You only need to listen to the first three or four lines and you've heard the whole song, give or take a few key changes that are designed to fool the unwary that they are listening to something different.

These songs should be banned from radio permanently, to be used only as a form of extracting information from gangland criminals. (surely even the most dedicated mafioso would spill everything he knows if forced to listen to Affirmation on repeat for an hour or more).