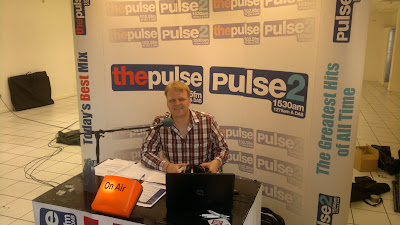 I'm working for the Pulse of West Yorkshire for a month, doing the daytime five-hour slot. It's a station I've always wanted to work for, having lived in its target area for five years of my younger life.

Today, I was sent on an outside broadcast. I've done a fair few over the years but as a freelancer it's one of the things you miss about having a regular, nailed-down, six days a week gig. Still, off I was packed to Keighley, on the far edge of West Yorkshire, where the radio station had been doing its Proud To Be Local campaign all week.

I was in the Airedale Shopping Centre, and having been seated at a desk at the front of an empty shop with branding all around me, I looked a bit of a sitting duck. People who notice OBs react in one of a few different ways; they gawp like hell for ages and assume you haven't noticed, they come over and chat and take whatever merchandise is on offer; they ignore you entirely or, regrettably, they try to put you off when you're doing a link.

Plenty of the first three and, fortunately, only one solitary example of the latter; a teenage girl with a Croydon facelift who thought it would be kerrrrrrr-azy, and ever so cool to all her gang, to shout something obscene, followed by the name of a rival station, in my direction. The daft lass hadn't accounted for me not being on air at the time though, as a song was playing on the speakers and I was not wearing any cans and, indeed, not actually speaking into the microphone.

The official stuff consisted of brief interviews with a woman who owned one of the cafeterias in the shopping centre, plus a local councillor who used his couple of minutes to sell Keighley and sell it again. He was very impressive. Otherwise, I was required to present the show in the same way as I would have done if sitting at the controls in the Pulse's nerve centre in the centre of Bradford. I did also have my photo taken with the mascot of the Keighley Cougars rugby league club - a cougar that goes by the name of Freddie. The best mascot-related act of punnery ever. And, last but by no means least, the much-revered Ben Baker, resident and proud of the place, turned up to say hello - wearing an Atari T shirt.

Great fun, and over the next month I'll be doing a couple more, I think.
Authored by Matthew Rudd
Email ThisBlogThis!Share to TwitterShare to FacebookShare to Pinterest

The Pulse has a special place in my heart being my radio station of choice when I lived in Huddersfield. Hope you have a good stint there.