Come on down, Natalie 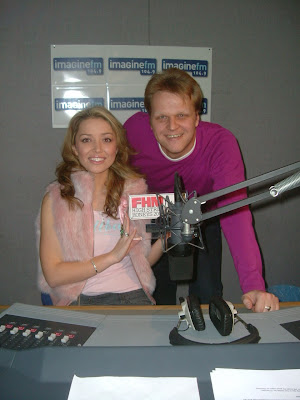 This is me with Natalie Pike, taken in the studios at Imagine FM in Stockport, where I hosted the breakfast show. It dates back to 2004.

Natalie was from Wythenshawe and was at university locally when I received a letter from her, asking for assistance in her quest to become FHM's High Street Honey, having been nominated by her boyfriend and made it through to the latter stages.

I hadn't read FHM for years; I was 31 by this time and had grown out of it. But I did know about the High Street Honey competition from my time with the radio wing of FHM's parent company, Emap. The radio stations were constantly encouraged to cross-promote through their DJs and so many a jock would start personality links with "just been reading in the new Q magazine..." and the like. Heat, an abomination of a publication, got a lot of this cross-promotion. They repaid the compliment by making an ad for broadcast on our stations which promoted an interview with Zoe Ball - at the time she was hosting Radio 1's breakfast show; the ads even referred to this. Programme Directors within Emap were hopping mad and the ad was pulled quickly.

Anyway, despite my lack of knowledge of FHM's current campaigns, I invited Natalie and her fella (I feel awful, but his name entirely escapes me; he looked like an unbearded Badly Drawn Boy and was a dead nice chap) on to the programme and began our own mini-campaign to get the listenership to vote online for her in the final. She impressed me a lot - not just physically, but she was engaging and droll and articulate and seemed to be having real fun in her campaign to win the contest.

During the weeks of voting that followed, she had acquired enough local kudos to secure an invitation to the Manchester City players' Christmas party. As she was a City season ticket holder (this is allowed when you live in Wythenshawe) she accepted the invitation. It was the occasion when Joey Barton had that mis-coordination involving a cigar, a team-mate's eye and a spot of red mist. Natalie duly came into Imagine the next morning to explain what she'd seen, giving us an exclusive for our news team which nobody else could get. She also told us she had been pursued by Shaun Wright Phillips all night - whom she politely told to go away. Good lass. All this was good radio for us, and good preparation for her as the final approached...

She won by a mile. An absolute mile. I can't say how effective our campaign was, but I'm damned sure it helped. And, reverting to red-blooded male type for a moment, I scanned the physical wares of the other candidates and saw nothing which should faze her.

I didn't live locally and occasionally stayed on a contra deal at a hotel up the road from the studios when a long day's work had made the trip back to Hull counter-productive. On the night of the final, I was dead to the world in my room when my text alert beeped and roused me. It was Natalie. All she said on her text was "I won! I won! I won! Thankyou, thankyou, thankyou!". As soon as the result was announced, a camera crew started following her for a week, and two days later it was in my studio, filming the two of us, plus proud boyfriend, as she kept a promise to give me the first full interview (after that of FHM themselves) if she proved victorious.

My abiding memory after that was our attempts to organise an FHM signing session at the local WH Smith store with Natalie, which she was up for, but the alpha female in our sales department who was incapable of liking anyone who challenged her self-appointed position as Most Beautiful Woman Alive was so snooty and horrid about the idea that Natalie decided to pull out altogether. She kept us informed of her activities for a while, and the product of the camera crew's efforts was shown on Bravo a few weeks later. The bloke who fired me from Emap - see one of the quotes on the left - emailed me after the programme was aired to say he'd seen it; it was the first time I'd had any communication with him since the day I'd left his employ four years earlier.

I left Imagine FM within another six months or so. The last time I saw Natalie, she was a hostess on the revived The Price Is Right. When I knew her, she was bright and resourceful, as well as easy on the eye, and I genuinely hope she's doing really well today. Her bloke was dead proud of her ("it's all his fault") and the thing that struck me most was how she was so disdainful of lazy hacks who assumed that now she had a soupcon of semi-fame, she would dump him and go for some tossy footballer or F-list pop pleb. I don't know what either of them are doing today, a little more than three years on, but I hope they're doing it together.
Authored by Matthew Rudd
Email ThisBlogThis!Share to TwitterShare to FacebookShare to Pinterest