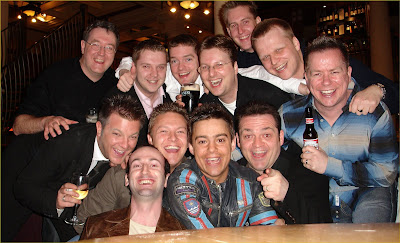 We didn't have a jingle which said that, sadly. It'd have been great if we had.

The photograph is my favourite picture in my recent portfolio (ie, all the ones taken since acquiring a digital camera). It is of most of the presenters who worked for Viking FM in Hull, serving (East and bits of North and South) Yorkshire and (North and North East) Lincolnshire in a period covering, roughly, 1997 to 2001.

It was taken at the station's 20th birthday party in 2004, where we'd all decided to join the official bash a little later and go round a few haunts of Hull's old town which were frequently visited on station nights out in our days working on Commercial Road. I'm second on the right, with my shortest ever haircut, leaning on that white shirt sleeve.

Far more significant people than me on there include:

JK and Joel - JK is at the very front in the stripe-sleeved jacket; Joel to the left with wine glass and cigarette. For all the success they later had at Key 103, which got them their Radio 1 gig, it was at Viking where they say they had their biggest buzz. It is genuinely hard to put into words just how absolutely brilliant they were at Viking. They were treated by the listeners like pop stars - girls hanging round outside the studios, sold out club gigs and personal appearances, and shamelessly sexual graffiti famously daubed on the walls outside. I didn't see much of them at first as they were daytime jocks, long-established, and I was new and on the nightshift, but when they shifted to breakfast together (JK initially did it alone) I saw them every morning. JK was always quick to thank me when RAJAR posted a good 6am hour survey, which I was in turn very grateful for. When they left, a massive hole was made in Viking's building, even though their replacement...

Simon Hirst - ... was as dynamic a presenter as Viking could have got, but he would have been even more dynamite for Viking if he'd been with us when JK and Joel were still there. Hirsty, whose head is only on show between JK and Joel, is something of an icon in Yorkshire as a whole. He's been on Galaxy's breakfast show for some years now and is a champion anorak, networker and archivist within the industry. I first heard him on the Pulse in the mid-90s when I was a hack in Huddersfield, and first worked with him at Hallam FM in Sheffield in 1996. Supremely gifted and creative, and egoless in the extreme, he took over Viking breakfast from the lads for little more than a year before the dream Galaxy move came. You may recall him hosting hit40uk after Neil Fox quit. He remains a close pal, attended my wedding and we meet with mutual friends for a night out every other month.

Paul Carrington - an inspirational presenter of humour and humility, the Funster wasn't actually on Viking when we were (he was on the AM sister service Magic 1161) but was someone who everyone from JK and Joel downwards admired. He's standing on the far left, with the specs. Paul won Sony Awards in his time for his controversial and hilarious shows at Signal Cheshire (later Imagine FM, where I was doing breakfast at the time of this photo) in the 1990s and later became boss of Minster FM where he gave still-a-schoolboy Hirsty his first show. In recent times he was an AM stalwart, working for Great Yorkshire Gold and latterly Magic 828 in Leeds, before joining the BBC in Leeds last year.

Scott Makin - holding the bottled lager on the extreme right, Scott got into radio by accident as he trained as a secretary and was working for a station in his native north east when someone noticed his deep, gravelly voice and put him on air. He joined Viking to host the mid-morning programme and posted almighty figures for numerous years thanks to his laid-back approach and killer Top 10s at 10. He left to return to the north east and is currently the co-host of Century FM's breakfast show in Gateshead, serving the whole area, and still as unaffected by it all as ever. A smashing bloke.

David Johnson, at the extreme front (it was he who set up the camera, see), a softly-spoken and charismatic Northern Irish presenter who came to Hull for university reasons and ended up on the late show and then drivetime. A nice, quietly ambitious fellow, he went on to present for Century FM and then Key 103 in Manchester, and also is in demand as a voiceover artist; Steve Jordan, pointing at the front and re-creating the traditional DJ shot of the 80s, is a highly successful breakfast show host who presented shows at Century FM (now Heart) in Nottingham and Leicester Sound before returning to Hull with Magic 1161 to take over from Paul Carrington. He is now my colleague again, on KCFM; Lee Thompson, bespectacled and holding Guinness in the centre, a Geordie music scheduler and occasional (and brilliant) presenter who left Viking to return to Newcastle and Metro Radio, later freelancing as a researcher and producer for music channels and documentaries; Phil Mackenzie, to Lee's right in the white shirt, probably the most versatile person I've ever worked with in that he was a presenter (did the overnights before me), the station sound producer (made the sweepers, jingles and promos), an engineer (unofficially, but he was there in emergencies) and producer (JK and Joel and the numerous club nights). Phil went into management after leaving Viking, then returned to presenting with Minster FM in York before taking on programme manager roles at Tower FM in Bolton and, lately, the Revolution in Oldham; Mark Somers, the current co-host of Viking breakfast who has been at the station for nearly a decade now, having started on weekends when he was still (in law, at least) a boy, albeit a boy with a man's talent and nerve; and Simon Scholes, at the very top of the pic, who was a technical operator and programming assistant at the station, and was also a talented decathlete until injury got him.

Mentions also for Simon Logan, a fantastic breakfast show host who is now completing a decade at Radio Aire in Leeds; Cameron, also at Radio Aire in presenting and production roles, and who at Viking hosted the most ludicrously brilliant, rule-bending evening show I've ever heard; Sam Heywood, who co-hosts breakfast now with Mark and has been in situ for ten years; Ben Weston, who has worked for a clutch of big stations since quitting the late show in 1997 to work in Dubai; Sara Fellows, a gorgeous girl who did the late show for a bit before going to other stations in Yorkshire; James Roberts, another late show host with big management ambitions, and now a decision-maker at Radio City in Liverpool; Ian Roberts, a mad Manc who did evenings under the name of Big E before returning to the north west; Paul Griffiths, one of the most natural presenters with the "patter" of the job, now on Radio Aire; and Jon Fox, who rose quickly from student part-timer to lates and then breakfast with his mate Tom Rhys, and now does breakfast at 210FM in Reading. They were all on the team during this period but for one reason or another, aren't on the photo. I hope I've not forgotten anyone...

It's one hell of a radio team which you are looking at. I feel privileged to have been a small part of it.
Authored by Matthew Rudd
Email ThisBlogThis!Share to TwitterShare to FacebookShare to Pinterest