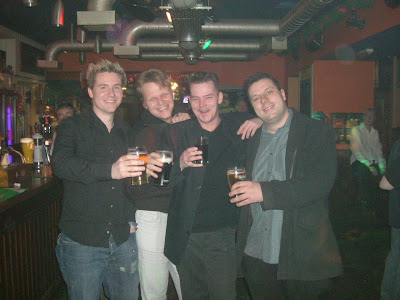 Another photograph of me, in a bar, with some disc jockeys. These three lads, however, are also the closest friends I've ever had.

It was taken in Halifax, circa 2002. I'm second from the left. The four of us knew each other from the RSL project Spark FM, a mish-mash of a temporary station based at the Dean Clough complex in Halifax. It was a mish-mash because numerous mishaps befell it, but it survived its 28 day run because of a hard-working bunch of people.

I'll always be personally grateful to it, not just for introducing me to the chaps above, but also because the shows I did on it gave me the confidence to decide I could now really have a go at making a career from radio - and two months later, I was on Hallam FM in Sheffield and my life changed course.

I've done loads of RSLs over the years. They are Restricted Service Licences, handed out by the (former) Radio Authority (now Ofcom) either for community or fundraising reasons, or because they are considering advertising a licence for a full-time station in the area and want to gauge local reaction and the strength and keenness of potential bidders. The station I work for, KCFM, had an RSL in 2005 (which came from the KC Stadium), as did numerous other radio groups hoping to win the permanent licence.

Spark FM was a bit different. In the 1990s, RSLs were commonplace to emphasise that commercial radio could have a more localised and community feel to it. There are numerous community stations, which are run or regulated by councils and do not use RAJAR, around the country - examples being BCB in Bradford and Pure FM in Stockport. The Radio Authority decided, almost seemingly by random selection, that the town of Halifax could do with a temporary station and so Spark FM came along to have a go, as did others.

The chap on the right of the photo, Tim Morsley, was one of the directors of the Spark FM company, along with his then-girlfriend and a couple of other local radio devotees. I was living in Huddersfield at the time and had just done an RSL there (called Huddersfield FM, a station which then won a permanent licence for the town a few years later and is now corporately owned, broadcasting as Home FM) and had asked the man running this RSL if he knew of any others. He gave me Tim's number, and so began a friendship which continues to this day.

Tim is a music fanatic, and more specifically, a chart fanatic. He owns every single ever to reach the Top 40 (apart from Junior's Mama Used To Say which I managed to snap accidentally while taking it from its cover on Spark FM and never got round to replacing) and continues to update his collection depending on chart positions each week, as well as sending a weekly text message to loads of people in his phone with chart news, updates and predictions. He also knows the order in which every single chart-topper went to number one - so give him a date and he'll tell you who was there, when they initially got there and how long they stuck around.

He's also a talented radio DJ, having worked on Radio Calderdale (Halifax's hospital station) for numerous years, but for one reason or another, has never turned professional even though he has the skill to do so. He remains a decent, honest and unflappable bloke, now a proud father of two.

On the left is Matt Wilkins, the youngest of us - he was just 18 when Spark FM went on air but was irritatingly talented even then. Like me, he used his Spark experience to get on Hallam FM and we did the swing shifts between us for a while after. He went on to a very successful career in commercial radio - he did mid-mornings for Radio Aire, then joined BRMB to do evenings and earlies, before joining Galaxy in Leeds to host mid-mornings. He's now on the late show at Radio City in Liverpool, and he's still irritatingly good.

Next to Tim is Mike Earnshaw, of whom I have the best memories of Spark FM. Mike is a Lancashire lad, a Morrissey fanatic who aped his hero's hairstyle then (and still does) and presented radio programmes with exactly the sort of enthusiasm any heroic amateur presenter, as we all were, should. He did a couple of alternative shows a week, and would turn up at the studios, fag in mouth, with a huge pile of long players and 12" singles under his arm. He would then spread them out on the floor, occasionally stopping to pick one up and tell a story ("that's a test pressing of Spear of Destiny's Never Take Me Alive, isn't it great?") before going into the studio with just one of them. He'd then introduce himself and his first song ("Hi, I'm Mike Earnshaw and this is Killing Joke") before coming back into the office to stare at the impromptu carpet of vinyl, agonising over what to play next. A whole three hour show would be done like this.

Spark FM was a fantastic time. It was gloriously amateurish, and that's meant in a thoroughly nice way, as RSLs are meant to be like that. Even RSLs which have a long-term of goal of winning an Ofcom licence can have an amateur sound to them, due to the need to recruit volunteers and a lack of studio training time. This isn't true of all RSLs - most of the ones here in Hull all vying for the permanent prize were of a good quality - but back in the 90s when permanent licences were by no means a guarantee, they were there for the unambitious music lover or the young wannabe DJ to indulge in their passions and fantasies.

We had three rooms at the Dean Clough complex - one was a relatively big office, then there was storage at the back and slightly cramped but well-equipped studio. There was a minicab firm next door, who doubled up as our traffic and travel correspondents on the breakfast and drive shows.

There were some belting mishaps. The studio microphone was not wholly reliable at being switched off when the fader came down, leading to one indie presenter shouting "oh shit" after garbling his speech and fading out the mic, only for his expletive to go out on air. Another presenter was dismissed for playing a Public Enemy record with its expletives unbleeped at 7pm (and he was supposed to be doing a soul show); a third was tumbled for doing his show drunk and high; a fourth couldn't do his first couple of days on the afternoon show because he was on trial at Calderdale Magistrates Court.

Tim had used some of the budget to buy a cheap but reasonably produced package of jingles, one of which contained the name of every presenter recruited to do a programme, with the v/o just announcing the names in list form. This was made a little too far in advance to be accurate by the time the station launched, and after a fortnight you could play the jingle and after each name add a word or two of your own ("sacked"; "quit"; "never turned up"; "dead"; "who?"), while by the time the month was up, the jingle contained nobody on the weekday schedule except the breakfast show host, but people still played it - just so we could all fill the gaps.

Although I was only recruited a week or so before launch and was only given one show a week as a result (Saturday breakfast, which I enjoyed), I fortuitously ended up being the launch presenter at midnight. This was because only four of us were in the building at the time, and Tim's plans to be the first presenter himself were scuppered by an almighty row with his girlfriend on the telephone which ate into his preparation time. We launched a little earlier than planned due to technical mishaps elsewhere, and when Matt Wilkins was making his promotional trailer in the studio before launch, his request for "one of the shittier sounding" jingles to go on the end was, sadly, broadcast.

So, at midnight, a switch was flicked somewhere and I played a jingle. A thumbs-up from those standing next to a radio in the office confirmed we were on air. Then, as if to emphasise that cheese and predictability (of which I remain totally unashamed) were at the forefront of our minds, I began with The Final Countdown by Europe. We received our first telephone complaint during this record, and the caller wasn't complaining about the record, I should add. He was in Todmorden - a bit of Calderdale which is on the border with Lancashire - and was moaning that the reception didn't get to him very clearly.

My memories of that RSL are very fond. I was single at the time and was a little successful, though I say so myself, with one or two of the twentysomething ladies who did shows there - though when one of them punched me square in the face for no reason in front of Tim (and I mean it when I say no reason) I realised she was probably not ideal girlfriend material. We got some reasonable listener correspondence, with one bloke ringing every night without fail to ask for a dedication for the nurses and patients at Northowram Hospital. There was a jazz show one evening a week, hosted by two students who would bollock the listeners for not ringing up when they had a prize on offer. Two mad women called Audrey and Linda had a weekly programme which garnered the most callers for any one show when someone dared them to play Bang And Blame by REM for the whole of their two hours. And the community element was fulfilled - the station got newspaper publicity and good local guests, and tried at least to cover local news although I stopped them from reporting court cases when it was obvious there was no legal training among any of them...

Most of all, I have a lot to thank Spark FM for because it gave me three fantastic friends, whom I still see sporadically on nostalgic nights out in Halifax. They all attended my wedding - Tim gave the reading and Matt was one of the ushers. Mike didn't have a specific role on the day but was there nonetheless, and he did do his fine Jarvis Cocker impersonation in the evening.

Moreover, Spark FM gave me a career. I'd done better organised and less chaotic RSLs prior to that autumn of 1996 in Halifax, but only Spark made me realise that I could actually do this radio lark as a career. I've been thanking it ever since.

Halifax now has a community station entitled Phoenix FM which is run full-time thanks to European Grant funding.
Authored by Matthew Rudd
Email ThisBlogThis!Share to TwitterShare to FacebookShare to Pinterest